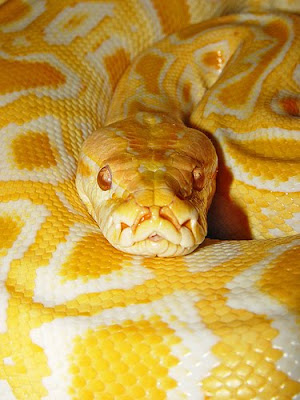 There is no honor among thieves, it is said. And bad guys can't count on bad animals, as drug dealers in widely dispersed parts of the world discovered recently. Luckily for the law-abiding among us, it's hard to know exactly how much to feed your animal employees to ensure their loyalty:

-In Canada, overfeeding bears with the munchies proved to be a bad strategy:

A pair of marijuana growers in Western Canada appear to have been using bears to protect their illegal crop, but the well-fed animals proved to be a bit lax in their guard duties, police said on Wednesday...

Officers were initially worried the bears might be dangerous, but quickly realized the animals were actually very docile and content just to sit around as the marijuana was seized, police said in a news release.

-And in Italy, going too far in the other direction backfired:

Police raiding a drug den in the Italian capital have been confronted by an aggressive albino python which was used to intimidate addicts.

Police had been tipped off that they would find "an animal" during the raid on the apartment in the centre of Rome, and when they opened the door they saw a striped yellow and white snake curled up on a heat mat.

The snake, which was three metres long and was kept hungry so that it would be more aggressive, was allowed to roam the apartment to scare addicts into paying for their drugs, police said.

Animal services were called to capture the snake, which was tempted into captivity using a whole chicken and sent to a nearby zoo.

Albino python with no known connection to the drug trade by Flickr user Tambako the Jaguar.