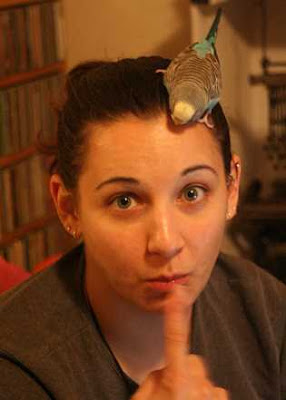 -In Britain, a bird gets in a 2-for-1 deal, being bad both to a fellow bird and to a totally innocent human: A seagull caught an escaped pet parakeet, and then dropped it on the head of a unsuspecting pedestrian:

‘It was just the last thing you’d expect when you’re walking along eating a pack of chips. I felt something scrape my head then saw it bounce off and hit a shop window. I couldn’t believe it when I saw it was a budgie."

-And in Columbia, a parrot has been taken into custody by police as part of a conspiracy to sell drugs:

According to environmental authorities, Lorenzo the parrot was trying to tip-off a local drug cartel when officers conducted an undercover raid.

"This parrot was sending out alerts," said Environmental Police Officer Hollman Oliveira. "You could say he was some sort of watch bird."

Lorenzo caused quite the stir as he was presented to journalists. The well-trained creature even showed off his look out skills as he yelled out: "Run, run you are going to get caught."

Perhaps the most shocking part of this news is that Lorenzo is merely the tip of a pstittacine criminal iceberg: authorities claimed to have seized over 1700 similarly trained parrots, and he was not alone in this case either: Four men and two other birds were also arrested in the raid.

Photo of another unhappy victim of Budgie-on-Head Syndrome by Flickr user Lodigs.