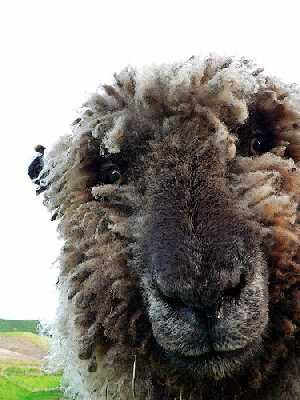 I could post today about the escaped monkey that trapped a woman in her garage in San Antonio, but I wouldn't want readers to get the idea that monkeys and dogs are all we have to worry about. For example, you don't want to let your guard down around sheep. You may think they're cute and wooly, but ask the couple in England who came home after a ram crashed through their home's glass patio door:

The ram was unharmed but left a trial of destruction in its wake. Paula Smith and her husband Ed thought their home had been raided by burglars when they returned from a walk.

Mr Smith was reporting the break-in to the police when Paula's uncle phoned to explain.

Mrs Smith, who runs a livery, said: "We saw all the glass and all the mess and we were very scared.

"For about 15 minutes I was racking my brain wondering if I'd upset anyone for them to do this, while my husband was on the phone to the police reporting it.

"As he was doing that, my mobile rang and it was my uncle saying the farmer was trying to get in touch."

It's estimated that the damage will cost thousands of pounds to repair. Mrs Smith goes on to describe the details:

"The whole house stank because of the muck it left behind and I've had to throw out the rug in the living room.

"The carpets have to be replaced, because we can't get the stains out, half of the range cooker we can't use because the door's wrecked and the hob doesn't work. The patio door can't be replaced for another month.

"We've had to board it up but because it's been raining. It's damp and that smells now too.

"It's going to be a big job to sort out because the walls will need replastering because of the way the door was damaged."

And don't think this is an isolated incident:

Tim Price, of NFU Mutual, which is handling the insurance claim over the incident on August 29, said: "At this time of year, when sheep are coming into season, it is quite common for rams to see their reflection in something shiny, think it's a competitor, then attack it.

"Cars are more often affected if they are parked by fields or in moorland. Rams will see their reflection in a mirror or a hub cab and start fighting and owners will come back to a lot of dents."

Sure sounds like he is awfully familiar with the extent of the sheep-rampage problem, and who would know better than an insurance agent?

Email ThisBlogThis!Share to TwitterShare to FacebookShare to Pinterest
Labels: sheep