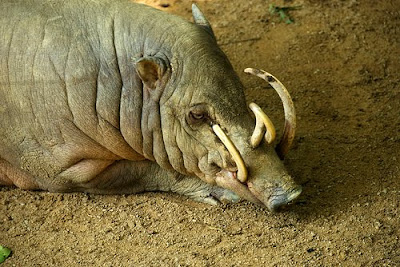 In honor of Banned Books Week, today we consider a book about animals that could never be published today.

Sadly, this book would probably never get to the point of being banned. It would never get written, due to the self-censorship or self-delusion practiced by most writers about animals nowadays.

Who's Who in the Zoo: A Natural History of Mammals was produced by the WPA Federal Writers' Project in New York and published in 1942.

The writers were unconstrained by modern notions of political correctness. Happily informing us which animals are used for their fur, desired by big-game hunters for trophies, and good to eat, this book also advises that all sorts of wildlife make suitable pets, including marmosets, coatis, skunks and raccoons.

The authors also have no qualms about insulting animals where it's called for and revealing unpleasant truths about animal behavior. Here are just a few instructive excerpts:

Other species of South American monkeys are less surly in captivity than the Howler.

When a Marmoset is mischievous a slap will not cause it to behave, but it quickly obeys when its ears are pinched or bitten.

Domesticated (Indian) elephants are used to capture the wild ones. Two tame elephants will squeeze a wild one between them, holding until their masters have bound its legs with chains.

The Babirusa is one of the ugliest of the wild swine.

The Guanaco is so stupid that the native Patagonian Indians are able to surround the herds and club many of their members to death.

The mother (Tiger) rarely deserts the young in infancy, unless hard pressed. But she has been known to eat her kittens when food was scarce.

The Camel is known to have served man for the last 5000 years, but despite long domestication it has a very ugly disposition and is not attached to its master.

One also has to admire their skill at getting in a dig at large groups of animals while weakly complimenting one of them, as exemplified by this remark about the capybara:

Largest of all living rodents, the Capybaras are the least obnoxious

It's sad that so few of us are carrying on this noble tradition of honesty and devotion to the truth. This blog, at least, promises to continue to uphold it.