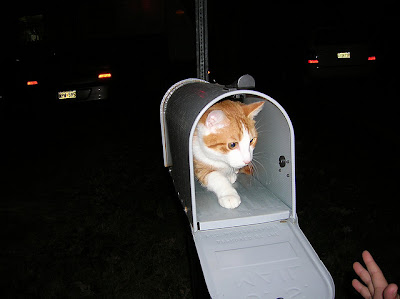 -Reptiles on a plane: An Australian cargo pilot was making a solo flight when a snake slid out of the dashboard and along his leg. Australia being a place where a decent proportion of the wildlife can kill you with various venoms, he did not wait for a positive species ID, and quickly made an emergency return the airport.

His level head saved him, unlike the passengers of a flight where a small croc escaped from someone's luggage. In their panic they unbalanced the aircraft and it crashed, killing all but one of them.

-Cats vs Post: Yet another customer had mail service suspended in England because of his vicious cat. Similar to previous cases, (for example here and here) the owner claimed the accusation that his pet was a 'health and safety risk' was "utterly ridiculous," and a neighbor said 'Snowball is a lovely cat and friendly. I can’t imagine her ever attacking anybody.'

But you can't fight the post office, and delivery was only resumed when he built a cat-excluding cage around his letter slot.

-Bears where they shouldn't be: Officials in LA captured a bear that's been wandering a neighborhood for about a month, committing offenses like breaking into a refrigerator and eating frozen meatballs. The bear didn't go down without teaching one resident an important lesson: A man was caught on video nearly walking straight into the bear because he was texting.

Let this be a warning to keep those phones in your pocket when you're on the move, because you never know when you'll come face to face with a bad animal.


Cat waiting for the postman by Flickr user nonasuch.