Cow unclear on the concept? 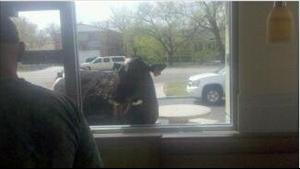 When cows escape, some head for the hills, like the famous Yvonne who eluded capture for months in Germany. But like us, not all cows prefer recreation in the great outdoors:  We've seen runaway bovines that went to a shopping mall, a supermarket, and a bar.

Those choices are understandable - if you lived all your life on a farm, you might want to check out those civilized amenties as well. But one has to wonder what was going through the mind of this cow on the loose in Colorado: she decided to visit a McDonalds drive-through.

The owners of Darcy call her "sweet" but also "stubborn," and say that when doesn't get attention in her pen, "she goes elsewhere to find it." Was she unaware of the sort of "attention" usually given to cows at a hamburger place? Or was this some sort of protest attempt?

We'll never know, because as we so often see on this blog, the law doesn't stand up to bad animals. The small son of the family was concerned that Darcy would end up in jail. But there's no law in the Colorado town against cows roaming at large, so her owners didn't even get a ticket, and Darcy will never have a day in court to explain her motives.