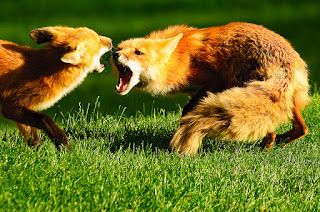 As expressed in their charter, "The goal of the Olympic Movement is to contribute to the building of a peaceful and better world, by educating people through sport practised without discrimination of any kind and in the Olympic spirit which requires mutual understanding with a spirit of friendship, solidarity and fair play."

Readers of this blog know that animals don't give a damn about a peaceful world or fair play. So you won't be surprised that foxes are trying to sabotage the 2012 Summer Olympics in London.

According to the BBC, at a test event being held at the Royal Artillery Barracks in Woolwich, foxes have chewed through fiberoptic cables, eaten microphones, and used the podium as a toilet.

The solution may seem obvious when you learn what event is taking place: it's target shooting. But the participants refuse to step up:


Asked if some of the athletes may resort to more familiar means to rid the venue of the local wildlife, Underhill said: "We are athletes first, so we're not after shooting animals. That's not what we're here to do, we shoot targets."

And some of these people clearly don't know when they're being insulted. One said:


"Rumour has it there was a little 'present' left by the fox found in the indoor rifle range. It adds a bit of fun to the event. "

Foxes that don't care about peace or friendship by Flickr user David Kingham.