Not safe in my own home 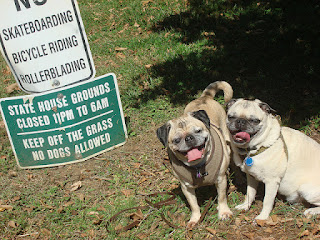 I've written about animal arsonists - and even canine ones - before, but it's never struck quite so close to home as this story out of Minnesota that I reproduce here in its entirety:


MINNEAPOLIS (WCCO) – A family dog started a fire inside a Chaska home after climbing atop a pile of items and relieving itself onto an electrical outlet last week.
The Chaska Fire Department said it quickly extinguished the fire. Authorities determined that the dog, a pug, had caused the fire after the strong scent of urine was found emanating from the outlet.

Initially, it appeared unlikely that the pug would be able to lift its leg high enough to hit the outlet. But closer inspection revealed that the pug likely climbed atop items that were on the floor, the department said.

It is not known how much damage the house sustained. Authorities also gave no word as to the health of the pug.

You'd think if anyone would know better than to allow these animals in their home, it would be me. But I'm just as much a victim of cute animals as the rest of you. We're all in this together, so let's all take a moment to check our smoke alarms - AND make sure there are no piles to climb on next to our electrical outlets.

Scofflaw pugs by yours truly. Yes, I am a slave to those dogs. Did you think I didn't personally know what I was talking about on this blog?