Lemur on the Lam 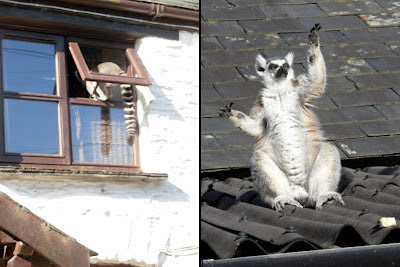 Probably nothing could be written that is better than those photos standing on their own, but here goes: This is a ring-tailed lemur that escaped from a zoo in England. It was first spotted by a resident who told the story:

"We saw an unusual-looking animal in the middle of the road. We had to stop for it and we were astonished to see that it was a ring-tailed lemur.

"We went on our way, but called home to let my wife Debbie know that it had just walked past us and was heading towards Berrynarbor."

His wife opened the door to find the lemur happily mincing down the family's driveway.
Mr Denyer said: "Debbie stepped out of our front door and was amazed to see the lemur strolling casually down our driveway, eventually stopping in our front yard."

The couple called the wildlife park assuming it was their lemur, but after getting no reply she called the police and told a bemused operator it was a real lemur.


The lemur was recaptured without incident, but for a change, it looks like this is a case where an animal is actually going to pay for its misbehavior - and for not having the sense to appreciate its good fortune. According to an owner of the zoo:


"It is the second time we have had a lemur escape the park this year... They are clearly getting too mischievous and naughty for their own good.

It's a shame because at the moment they roam free around the park, but now we're thinking we will have to contain them for their own safety. You would have thought that 28 acres would be enough for them, but obviously not."