A blow against bad bird behavior 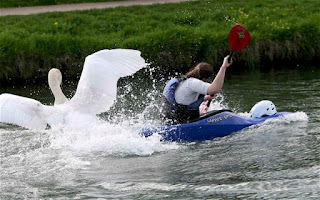 After a multi-year battle, a violent swan has finally been removed from the River Cam in England.

The bird had earned the nickname Mr Asbo, which is British slang for "Anti-Social Behavior Order." One rower described his behavior:


"He is not like the other swans on the river. As soon as he saw you approach he would be there waiting and there was no way around him as he would sit in the middle and then close in to attack you. Once he even did a 'drone-style attack', taking off and flapping into my lap, virtually knocking me out."

But despite repeated offenses over the last three years, efforts to remove the swan had been thwarted by wildlife protection regulations - and by an apparent lack of concern on the part of authorities who have had a relocation permit since 2010 but failed to act on it.

This year, some said, the situation was more dangerous than ever:


"The swan is definitely the worse it has ever been. It’s not a logical bird. There is something missing in its brain... My biggest worry is that he will attack a young rower. This is a big bird and children cannot fend him off. If he knocks them out the boat, he could easily smother them with his feathers and drown them."

Yet, as recently as last month, officials said that once again, the bird could not be moved because mating season had already begun. But in a rare victory for the forces against bad animals, last week an emergency license to relocate the bird during mating season was granted, and he was caught by brave volunteers and sent to a secret location said to be sixty miles away.

And yet as usual, the animal has his defenders. One said "It's bang out of order. What right do they have to take him? He is a very intelligent swan and this is despicable."

Despicable? If you want to see despicable, read this story of a man in Chicago who was knocked out of a kayak and drowned by swans he was employed to care for. So, better late than never: we applaud the authorities in this case for realizing whose side they should be on before it went that far.