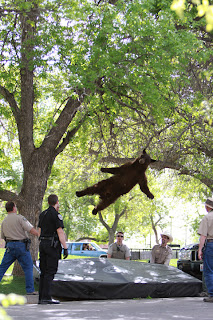 Unless your Internet connection has been down, no doubt you've seen that picture of a tranquilized bear falling out of a tree at the University of Colorado. But that moment of success is just one drop in a deluge of bad bear news:

- In Pennsylvania, bears chased a weatherman off his outdoor broadcast set

-A bear wandering a Florida neighborhood seems to have a drinking problem: it ripped open a case of beer on one resident's front porch, and also was seen lurking around a local Tiki bar.

-A bear crashed right through the glass door into a New Jersey school. Although the school's mascot is a bear, authorities deny any deeper meaning to the incursion: "All indications are that it was an accidental entry."

-And finally (for now), one that we'll count as a success story: A family in Montana visited their lakeside cabin at New Year's and found it had been ransacked. Although oddly, only blankets, pillows and comforters were missing, they assumed they'd been burgled - until they found a bear settled down for the winter in the crawlspace under the cabin, cozy in all their bedding.

They decided that they had no choice but to let the bear stay till spring, but authorities recently confirmed that it is gone. It moved on in early April, and cabin owner Judy Wing is now working on sealing up their crawlspace, and although the bear left the bedding behind, destroying it - “That fragrance wouldn’t be my favorite,” she said.