Enemies in our midst 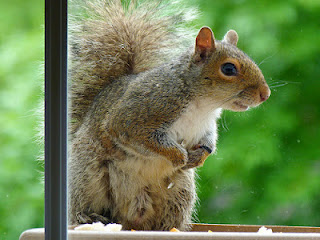 It can't be emphasized too often that the most dangerous animals are the ones you don't think you need to worry about. Sure, everyone knows to be afraid of a lion or a rampaging elephant. But the animals you're around every day have much better odds of harming you: remember that our own pets send an average 86,000 people to emergency rooms each year.

And most of us, even in cities, are also surrounded by another cute animal: squirrels. They seem harmless, but readers of this blog know better: we've seen them attack people and cause car accidents. And a couple of recent stories suggest that squirrels are getting more ambitious - and in fact, are possibly expressing their opinions about our environmental crimes:

-City officials in Bialystok, Poland, were discussing which trees to cut down in a local park when a squirrel jumped through the window in their office and staged a violent protest:

"The squirrel jumped onto the table and went berserk, tearing all our papers to shreds.

"If I didn’t know it was impossible, I’d think he'd overheard us planning to cut his trees down," said one official.


-And these rodents are doing damage on a broader scale in one part of southwest Florida where fires are being blamed on squirrels:


Scurrying along high voltage lines, the squirrels play a dangerous game when they touch one line while still on another.
"They create a connection between the two which is called arching and the electricity flows through them and can sometimes set them ablaze."

Because conditions are so dry in the area, brush fires are being sparked, and now some of these are destroying homes.

This may seem different from the first story, but think about it. Extreme weather conditions such as drought are the predicted results of human-caused climate change. And in the last case, the squirrel that caused the fire gave its life to start it: it was found dead nearby.

Was this another demonstration against human environmental damage - this one a suicide protest? We'll be following developments closely.

Squirrel at the window by Flickr user Rusty Clark, reminding us that they're always watching.