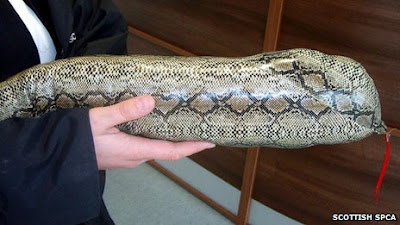 Last week we saw several cases where emergency responders were called out to subdue a large wild animal that turned out to be a life-size stuffed toy. Normally I would not revisit this topic so soon, but two recent events suggest that that post may leave some with the wrong impression.

In Nottinghamshire, England, police were called when a passerby saw a Cavalier King Charles Spaniel asleep in the back of a car in what counted for England as extreme heat (according to The Sun, "temperatures soared to 18°C (64°F).")

This is indeed a potentially dangerous situation, and no one should ever leave a dog in a hot car. Unless, of course, as in this case, it's a stuffed toy.

And in Scotland, a woman called the SPCA when she found a five foot long snake in her attic. "I'd brought gloves and a pillow case to enable us to handle and contain the snake safely, but as soon as we spotted it we realised the equipment wouldn't be necessary," said an officer. In fact, it was a snake-print stuffed draft blocker of the sort that you lay along the bottom of a door in cold weather.

The Scottish officers were sympathetic - "It did look very snake-like and was folded over into a box," one said - and had a sense of humor about the situation: They've given the "snake" a name and a home in their office.

The Nottinghamshire police, however, remained prickly about the situation and blamed the owner of the car, saying “Officers believed a dog could be suffering. This is a perfect example of why drivers need to think about what they leave on view.” No doubt they are cranky because they now have to reimburse the owner for the damage to the car.

The lesson here is obvious: it's not just imitation megafauna that can cause this kind of problem. Much smaller stuffed creatures can be just as problematic.

So again: We've got enough trouble dealing with the bad behavior of real animals. So let's all try to just look a bit more closely before calling in the troops.