The law stands up to bad dogs 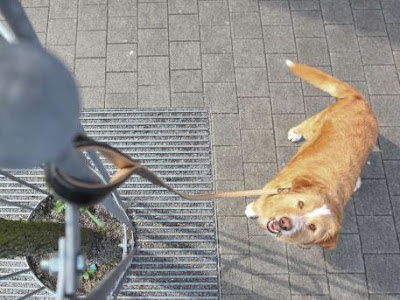 It's reassuring that once in a while there are cases where bad animals are NOT getting away with it. And it's even more gratifying when it's one of the animals that has the most frequent opportunities to trouble us: Dogs.

-In Germany, a woman who tied her dog up while she went shopping returned to find a ticket attached to its collar. As readers of this blog would expect, she denied the dog was at fault:

"I was only away for 20 minutes. They said Tessa had been left in the wrong place and was blocking the pavement. But she was sitting quietly and people had plenty of room to walk around her. She's sweet and tiny and loves attention, she'd never hurt anyone."

But authorities are not taking any nonsense, claiming the dog barked and tried to jump on passers-by. And since the owner contested the ticket and lost, instead of her original 35 euro fine she now owes 58.50.

-And in Hawaii, business is booming for dog trainers after a new anti-barking law was passed. It's now illegal to bark continuously for 10 minutes, or repeatedly for 20 minutes within a half-hour. More complaints are being successfully lodged than under the previous law, which required busy police to time barking for half an hour and then allow the owner to try to shut up the pooch for an hour.

Incessant barking these days adds insult to injury: According to the Wall Street Journal, there's speculation that complaints have risen because with the high unemployment rate, more people are home to be annoyed by their neighbor's dog.

As usual, some still side with the animals, like one local resident who said "To me, barking is good because it notifies you somebody's around who shouldn't be around."

But as in Germany, authorities are not messing around. One couple was cited five times for their two noisy dogs, accumulating fines of $575. They made a deal with the prosecutor to dismiss all but one citation if they submitted to "dog counseling" and remained clean of violations for six months. All is quiet for now, but it's not over, their dog trainer said ominously: "If [they] re-offend within six months then the matter will be revisited."