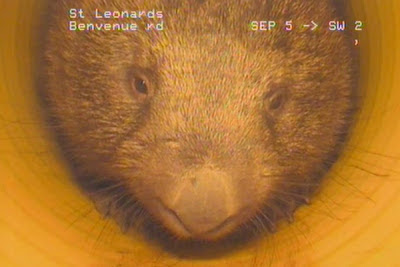 Animals interfering with transportation is an old theme on this blog, and two recent cases carry on the tradition:


A hotel supervisor was forced to drop her pants in the middle of a full midtown subway car Friday — when a brazen rat darted up her trouser leg. Ana Vargas, 40, said she was sitting in an A train heading downtown as it approached the Columbus Circle station about 7:50 a.m. when the rodent suddenly sprang.

“I thought it was my pants moving,” Vargas told the Daily News. “It just crawled up my leg. I shook it and nothing came out.” But then she realized she was being attacked. “I said, ‘Oh, my God — it’s an animal on my leg!’ ” she recalled. “He was very big. I was shaking, but nothing was coming out . . . I had to pull my pants down in front of everyone on the train.”

-This one is a twofer, also falling in the long tradition of animal drunkenness: A driver in northern France was forced off the road when a drunk deer stumbled in front of his car:


The driver was unharmed. But the police officers and firemen who rushed to the site were bemused. The deer was still there, bumbling across the road. They surrounded him in the central reservation on the road and noticed the deer clearly seemed under the weather - stumbling and disoriented.

It later emerged the deer was drunk after consuming one too many spring buds - a common cause of deer inebriation in spring.


And speaking of animals and people dropping their pants, we may be seeing the start of a new bad animal tradition. Recently we saw a man attacked by a bear while in an outhouse. And now an interesting story out of Sweden:

A half-naked 61-year-old Swedish man who was relieving himself in the woods got quite a start when a rampaging bear chasing an elk knocked him down – all as his wife recorded the unlikely chain of events with an iPad.


Last Sunday, Ola Åkesson left his normally tranquil summer cabin in the Ängraån nature reserve in northerneastern Sweden to take what he referred to as his “night time piss”.

Looking up as he heeded nature's call, Åkesson saw a baby elk on the other side of the stream.

“I called to my wife to get out the iPad to film the elk, when all of a sudden she screamed that there was a bear behind me,” Åkesson told The Local.

“I turned around and there was a huge bear right beside me – maybe half a metre away, I could have reached out and touched it – but I didn’t even have time to think.”

As the bear came charging onto the scene, Åkesson fell to the ground, all the while with his wife screaming in the background while filming the commotion.


Wondering how we've gotten to the end of this long post and still have no explanation of that seemingly unrelated photograph? Check out the new Animals Behaving Badly Tumblr, where we'll be collecting bad animal stories with particularly cool photos.