Should we call this a canine cat burglar? 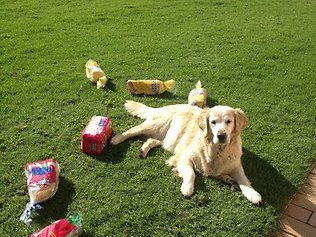 It's been a while since we saw a kleptomanic kitty on the blog, perhaps because that sort of thing isn't even news anymore. In England, in Seattle and California, cats have been reported who collect stolen items from all over their neighborhoods: gloves, toys, shoes and even underwear. There are so many of these cats that the editor of the book wouldn't let me include them all, claiming they were boringly repetitive.

But I don't think we've ever reported on a similar canine criminal. So now, meet this Australian golden retriever:


Owner Michael Shaw explained that his eight-year-old pooch mysteriously turned up with an unopened loaf of bread on Sunday morning, dropping it on the front step and lying down proudly next to her freshly baked trophy.

It didn’t stop there. Gillie has since returned with a total of 12 full loaves of sliced bread and two packets of muffins, despite the fact the closest shop is a 10-minute drive away.

“She brings back things quite often, but normally it’s an old gumboot or something like that,” Mr Shaw, 25, said today. “The only thing she’s eaten is the first bag of muffins and there was a new fresh bag there this morning and it was untouched.”

Gillie’s modus operandi up to this point has been to deliver the loaves one-by-one at the front step, then lie amongst her baked booty proudly with a wag in her tail.

“It’s like she’s bringing us gifts - she just lies around all of them,” Mr Shaw said.

He is yet to hear from neighbours about any missing baked goods, so the mystery continues.


While this is the first doggy thief and hoarder of this sort that has appeared on the blog, let's be careful not to let this become a salvo in the eternal war between cat people and dog people. It's hardly evidence that dogs are more moral than cats: the only reason we don't hear of such cases more often is that so many places now have laws against letting dogs roam.  They have the means and motive, they just don't usually have the opportunity. And let's keep it that way.


Speaking of animal thieves, are you reading Animals Behaving Badly on Tumblr? If you're not, you missed a lemur with an umbrella. It's not too late!