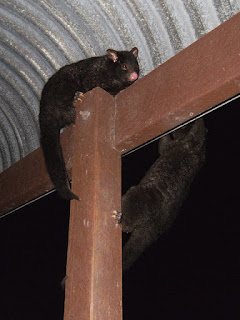 The most cursory search of this blog reveals that in Australia, animals are always out to get you,
from violent and perverted kangaroos to home-invading crocs to cute wombats gone mad, just to name a few.

And these animals are no respecters of status or precious cultural artifacts, as the Australian prime minister has found.

In the past Australian wildlife has been on Julia Gillard's side. When she was running for office in 2010, a crocodile correctly predicted the results of the election when it ate the chicken decorated with her photo, instead of one of her opponent.

But now she's narrowly escaped international embarrassment and been forced out of her official residence by some cute, fluffy Australian natives. She was hosting a dinner for a visiting foreign leader when suddenly all the guests were politely but quickly shooed out of the dining room. The reason, she told a reporter:


"It was because someone had spotted that wee was making its way down the wall to one of the very precious paintings from the National Gallery."

Due in part to these peeing possums living in the roof, she's moving out so the residence can be renovated.

Of course, news reports also noted that the 80-year old building badly needs new wiring and the removal of asbestos, and the possums are just the last straw for a project that's been neglected for decades. Perhaps these badly behaved marsupials are on her side after all?


Stand back from those possums in the rafters photographed by Flickr user Deirdre who knows better than to get too close, and thanks for the story tip to faithful reader Jennah Ferrara.