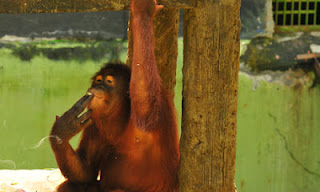 - In Indonesia, a zoo is preparing to move an orangutan to rehab, out of the reach of those who supply her habit. An island exhibit far from visitors is the only way to get Tori to quit smoking:


Tori learned to smoke 10 years ago by imitating zoo visitors, who would throw their cigarette butts into her open cage. She has been smoking ever since, according to activists. They say she holds up two fingers to her mouth to indicate she wants a cigarette and becomes angry and throws things if none are readily available.

"It is very common in Indonesian zoos for people to throw cigarettes or food [at animals] even though there are signs to not feed or give cigarettes," says Baktiantoro. "It happens all the time. [In Tori's case], people will throw cigarettes in, watch her smoke, start laughing and take pictures."


- And in South Africa, one of the most prestigious wildlife media organizations in the world is under fire for encouraging bad baboons. Regular readers of this blog are familiar with the baboons of South Africa who break into cars and houses to steal food.  Now National Geographic has given them their own reality show:

For the new Nat Geo Wild show, "Big Baboon House," a house near Pringle Bay, about 50 miles from Cape Town, was modified to allow hidden cameras to film a troop of Chacma baboons, creating a Big Brother-style show. Windows and doors were left open to let in the baboons.

On "Big Baboon House," the animals are anthropomorphized to within an inch of their lives, given human voice-overs and different names and personalities.


Local conservationists are appalled, but National Geographic was ready with rationalizations:

According to the Cape Times, National Geographic said in a statement that the baboons were not lured into the house, but "ultimately entered it of their own volition."

Meghan Gleason, digital media content producer for National Geographic Channels, wrote on an official blog that Nat Geo Wild had “undertaken a simian social experiment of a lifetime” to understand baboon behavior “so we can learn how to keep them out of homes and coexist peacefully with their human counterparts … all while having a little fun along the way as we observe these baboons having free rein over a posh house."


We suggest that National Geographic executives watch this video sent in by a faithful reader that shows what can happen to people who take the side of bad monkeys. Yes it's a cartoon, but remember that fiction can express profound truths.