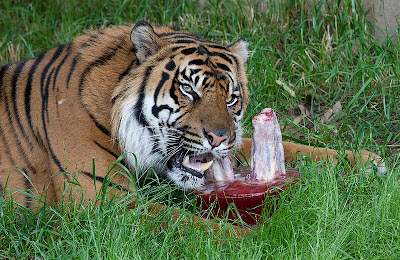 
“Too many slugs can cause problems, not just for gardeners. In Austria, they have had incidents of car accidents because the numbers have built up on the road and formed this horrible slimy slick and cars have skidded off.”


Unsuspecting Silvana Straccia paid $100 to swim with the creatures at Bavaro Beach in Punta Cana, wearing a bikini with a metal ring on it that irritated the dolphins.
Moments after she entered the enclosure, a dolphin locked on to her and whipped her in the face with its tail before hitting her in the stomach - sending her to the hospital with broken cartilage and requiring 8 weeks of bed rest.

Beaver bites girl; another authority who doesn't read this blog is quoted:


“I’ve been around a long time, and I’ve never really heard of anybody getting bit by a beaver,” said Lowe, a 23-year veteran of the Sheriff’s Office.

And finally for your entertainment, a relatively authoritative take on who would win a fight between a lion and a tiger.
Tiger with an ice treat at the National Zoo... don't assume this will make him keep his cool.