People who don't read this blog 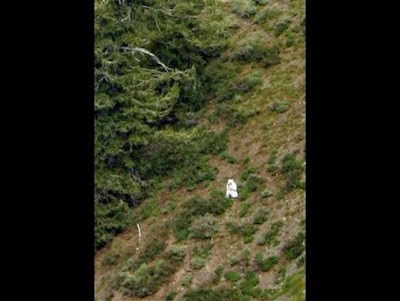 OK, maybe it's too much to expect everyone to sit down and read the entire archive of this blog back to 2009, as well as the book, although you'd definitely be safer if you did.

But some people really ought to at least check out the most recent posts before heading out into the wilderness. Just a few days after my post about murderous mountain goats, this report surfaced from Utah:


A man spotted dressed in a goat suit among a herd of wild goats in the mountains of northern Utah has wildlife officials worried he could be in danger as hunting season approaches.

Wildlife officials were contacted by a concerned citizen who observed and photographed something odd:


Coty Creighton, 33, spotted the goat man Sunday during his hike. He said he came across the herd, but noticed something odd about one goat that was trailing behind the rest. “I thought maybe it was injured,” Creighton said Friday. “It just looked odd.”

He said he pulled out binoculars to get a closer look at the herd about 200 yards away and was shocked. The man appeared to be acting like a goat while wearing the crudely made costume, which had fake horns and a cloth mask with cut-out eye holes, Creighton said.

“I thought, ‘What is this guy doing?’ ” Creighton said. “He was actually on his hands and knees. He was climbing over rocks and bushes and pretty rough terrain on a steep hillside.”

Officials wanted to warn the man of the danger, but initially he clearly didn't want to listen. After the incident made the news, they got an "agitated" anonymous phone call saying “Leave goat man alone. He’s done nothing wrong.”

Eventually, the goat man was convinced by a friend to come clean. He explained that he was trying out an idea for a hunting disguise. The man's name was not released, nor any explanation for how he expected to look enough like a goat to fool the goats and yet not get shot by his fellow hunters.

People, don't try this at home. Or in the field. As a Utah wildlife official said:


“People do some pretty out there things in the name of enjoying wildlife. But I’ve never had a report like this,” Douglass said. “There’s a saying we have among biologists — You don’t go far enough, you don’t get the data. You go too far, you don’t go home. The same is true with some wildlife enthusiasts.”