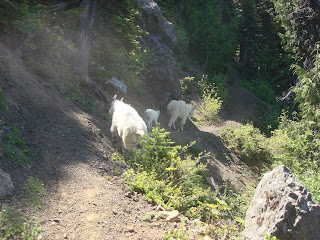 A member of the Animals Behaving Badly household is on a hiking vacation in Washington State, and earlier this week, I received this picture and an excited phone call from the wilderness about this wildlife sighting.

In the course of the conversation I turned to Google to confirm my recollection that the mountain goat is not a true goat and is related to the musk ox. In just the first few search results, what I found made me turn the conversation away from classification and say instead "Get the heck out of there!"

This is what was going on on the next mountain over:

"Nobody has been hurt by the goats. But a number of people have felt threatened."

And well they should, because this is a headline from a few short months ago:

Hiker killed by mountain goat in the Olympic National Forest

In October, an experienced hiker had stopped for lunch with friends when they were approached by a mountain goat. Although they tried to retreat, he was gored. A park ranger struggled to shoo the goat away from the injured man, and eventually he was extracted from the situation, but died later at a hospital.

Officials seemed to downplay the danger, attributing this crime to one crazed individual:

Barb Maynes, park spokeswoman, said the ram involved in the attack was known for its aggressive behavior, and the park had been monitoring the ram for "the last several years," she said.

The perpetrator was tracked down and executed, but the family of the victim is suing. And still, typically, when asked for comment on the current trail closing, wildlife experts make excuses for the animals:


While mountain goats are powerful and inquisitive they aren't generally aggressive, said Kurt Aluzas, a wildlife biologist. He told KING that the recent behavior is likely related to this year's deep snowpack that has confined the goats to trailside areas close to people. There's also the possibility that female goats are protecting their young.

The blog recommends that vacationers in Washington State not trust their lives to the opinions of wildlife biologists. One friend of the blog suggested that there are many safer alternatives: