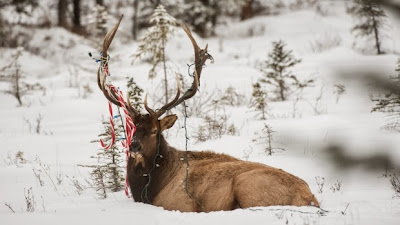 A couple of animals that got into holiday trouble:

-In Alberta, Canada, an elk got tangled in Christmas lights and needed to be rescued:


The bull elk was spotted wandering near the Alberta mountain town with lights and candy cane ornaments strung up in his antlers.

Parks Canada, which responded to a resident's call, tranquillized the elk to get him untangled. About 4½​ metres of lights were trailing behind him.

Their calm reaction is due to the fact that this is actually nothing new:

This year, at least two animals have been trapped in Christmas lights, he said.

And in Australia, one croc is already on the list for only getting coal next year after being greedy when Santa visited Crocosaurus Cove in Darwin:


Saint Nick took a dip in the Cage of Death to cool off and say hello to 5.5m-long croc Chopper.

"The water was really refreshing - I'm not used to all this heat and humidity," the North Pole dweller said.

But when Santa dropped in on another inmate named Burt, the 700kg monster made like the Grinch and stole the big man's sack.

The staff at Croc Cove leapt into action to save Christmas and to ensure Burt - who is a sizeable specimen at 5.1m - didn't end up with a bellyache.

They failed to tempt the seasoned reptilian negotiator away from his stolen booty until handlers upped the ante with a whole chicken. He dropped the sack and ate the chook- feathers and all.

Santa said the 80-year-old croc would be blacklisted for many a Christmas to come.
"Most of the crocs will get some nice big bits of special Territory ham (wild boar) but old Burt will only find coal in his stocking when I come back on Christmas Eve," he said.