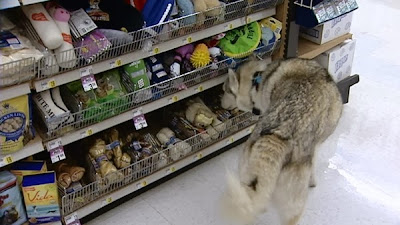 Some breeds of dogs were bred to do a job. And like humans, when they can't get work, they may turn to a life of crime.

A Dollar General store in South Carolina was robbed twice within a few minutes in broad daylight of dog treats, dog food, pig ears and beef bones. Fortunately, security cameras were rolling, revealing that the thief was a husky named Cato. From what his owner says, the dog had no excuse, but he's obviously been practicing:


She said she’s not sure if this is his first theft, but he has gotten into other local businesses. “He’s gotten into Ingles. He’s gotten into BI-LO. He goes to Pizza Hut. And he goes up to Yo Cup which is downtown too,” she said.

Darden said he’s not hungry. “Look at him, he’s fat,” she laughed. “Yes! I feed him. There’s food in there. There’s treats in there.”

This isn't the first time this sort of thing has happened - in 2009, a husky did the same thing in Utah, after disregarding an electronic fence and making a round trip of twelve miles to a grocery store.

So if you've got a husky and no sleds for it to pull, do your duty to the community and keep close tabs on it.