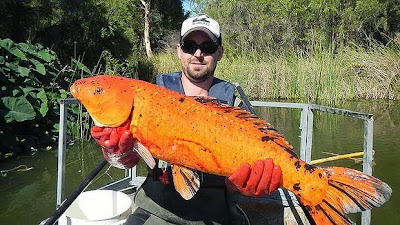 As if Australia didn't have enough animal problems, what with half the animals being venomous and the other half being invasive species eating all the cute native ones, LOOK AT THIS.

The scientist interviewed in this article is concerned about the fact that fish dumped into the local waterways by irresponsible pet owners can introduce diseases. And goldfish can do their own special damage: they like to dig around in the muck, which can cause algal blooms. Worse, apparently when the eat the algae, it doesn't kill it - it passes through their gut "reinvigorated."

But come on, surely that is not the scariest part, this is:


Dr Morgan said that his team had discovered 40 centimetre-long feral goldfish that weighed up to two kilograms.
"In WA, we have the fastest growing goldfish in the world," Dr Morgan said.
"They just eat and eat and grow and grow."