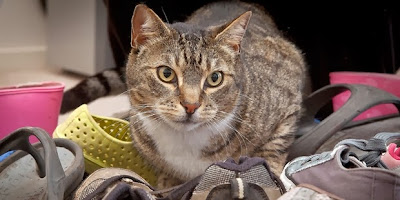 I can't think of a way to make a connection between these stories except to make a bad pun about the Crocs, and no one wants to hear that. So let's just leave it at: here are my favorite two stories I've collected since last week.

-We've seen plenty of cats who make collections of stolen items from around their neighborhood, but this one in New Zealand is impressive for her focus on a single type of rather large prey: she collects shoes.


A cat-burglar with a penchant for footwear is behind the disappearance of about 50 shoes in Arataki.

The cat has brought back all sorts of shoes from gumboots to Crocs, individual shoes to pairs, kids to adults and even a boxing glove. He drags those that will fit through the cat door while the rest remain on the drive or in the garden.

"The crazy thing is that there are pairs sometimes so he must be going back because he couldn't carry two," Miss Graham said.

-It was once thought that tool use was one of the things that separated humans from other animals. It's long been clear that this isn't true, and of course, once you can use tools, you can use them to behave badly.  A recent paper describes crocodiles in India and alligators in the US that will lurk around egret and heron colonies with sticks balanced on their snouts. As blogger Darren Naish explains:


Birds approach to collect the sticks for use in nest building and… well, let’s just say that it doesn’t end well for the birds.

It's pretty clear this is no accident: the crocs only do it during nesting season.

(And if you still aren't convinced that this is something animals can do, follow the link to read about a bunch more animals that use bait to attract prey.)