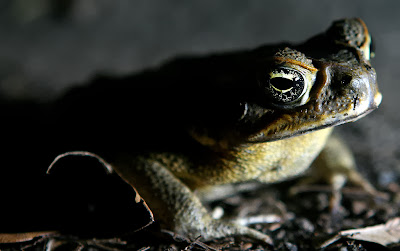 As if Australia didn't have enough animal problems, what with half the animals being venomous and the other half being invasive species eating all the cute native ones and the GIANT FERAL GOLDFISH, man's supposed best friend really isn't helping:


A jaywalking dog has caused a four-car collision, a five-woman fight and a two-man punch-up in Katherine.

The dog ran in front of a car, which managed to stop in time, as did two more vehicles following But then things went downhill:


"However, the driver of a fourth vehicle travelling behind was apparently distracted and was unable to brake in time to avoid rear-ending the vehicle in front, which pushed all of them into the rears of each other."

Supt Foley said a heated exchange between the women followed. An intoxicated man who witnessed the incident reportedly got into a scuffle with one of the women's boyfriends, who turned up on the scene.

-Elsewhere, toad-licking to get high is apparently becoming a canine epidemic:


QUEENSLAND dogs are getting addicted to the hallucinogenic sweat that oozes off the backs of cane toads.

Vets warn that some dogs are so desperate for a fix they deliberately hunt down the amphibians to stimulate the excretion of the deadly poison, then lick their prey.

Like all addicts, the pooches are risking their lives for their cheap thrill.

Jonathon Cochrane from the University of Queensland's School of Veterinary Science said there were some dogs he dubbed "serial lickers" who would be treated for cane toad poisoning a few times a year.

"To say a dog or a cat is having an hallucination is impossible, but some do star gaze or track something across the room that isn't there and others just stare out of the cage while we're monitoring them," he said.

One commenter on the article tells of a particularly persistent pooch:


My parents' dog 'enjoys' an occasional froth at the mouth, dilated pupils and convulsions. Has been 'enjoying' it for years....We have tried everything to get rid of the toads but when the dog wants one it will find it. Even when it is colder. It is almost like the dog has them 'stashed' somewhere.

-However, if it's any comfort, unlike so much other Australian fauna, at least dogs usually won't kill you - but watch out for your fellow citizens, and caterpillars:

According to the Australian Bureau of Statistics, Australians are more likely to die from caterpillar bite, gas cylinder explosion and falling off the bed.

Hot water taps, for some uncanny reasons, seem to kill more people than venomous spiders... Poisonous plants and animals killed much more than lizards and snakes.