Badger on a bender 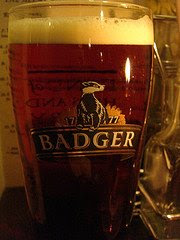 We've seen inebriated elephants and boozing bees; now we've got a drunken badger, and a report written by a police officer who sounds like he might be fun to have a beer with:

BERLIN (AFP) — German police called to clear a road of a dead badger found the animal in question had in fact gorged itself on over-ripe, fermented cherries and, blind drunk, staggered out into the middle of the road.

"The animal's stomach had turned the fruit to alcohol and the badger was, to put it crudely, drunk as a skunk," said a police statement on Wednesday. "In addition, the badger was suffering from diarrhoea studded with cherry stones."

Prodding the reluctant beast with a stick, officers managed to persuade it to leave the road near the town of Goslar in northwestern Germany and to sleep off his night of excess in a nearby meadow.

"It could not immediately be established whether the badger got into trouble with his wife when he came home in such a state," the tongue-in-cheek police statement concluded.

No word on whether a breathalyzer test was admininstered, although as usual in our stories, the animal went unpunished. Rather than being taken into custody, Reuters reports that the badger was scared away with a broom. (Also no word on whether brooms are standard German police equipment.)