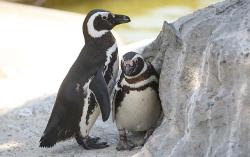 Gay marriage seems pretty common among penguins, if you can believe how many stories you read in the news. But as we saw last week, the behavior of penguin couples isn't always the most admirable.

So it isn't all that surprising that penguin partnerships of all sorts are vulnerable to bad behavior. One gay penguin couple in San Francisco that had been together since 2003 and even adopted a child recently broke up - and the homewrecker was a female. It's become a regular soap opera, according to the San Francisco Examiner:

Last year, the pair was allowed to incubate and hatch an egg another penguin had laid.

“Of all of the parents that year, they were the best,” Brown said. “They took very good care of their chick. He ended up being the largest chick on the island.”

One could say that all seemed to be going swimmingly with Harry and Pepper.

Enter the recently widowed Linda, who has long had a reputation of sorts, according to Brown.

Several years ago, she left her longtime companion and moved in with much older Fig just hours after Fig’s partner passed away, Brown said.

“That was the fastest we’d ever seen penguins move on,” he said. “To be completely anthropomorphizing, Linda seems conniving. She’s got her plan. I don’t think she was wanting to be a single girl for too long.”

This year, within weeks of Fig passing away in winter, Harry was seen in Fig’s old burrow spending time with Linda, Brown said.

Then one day, Harry and Linda approached Pepper’s pen and confronted Pepper. Harry began attacking Pepper violently and the three ultimately had to be separated, Brown said.

Harry and Linda successfully nested this year and eventually Pepper was returned to the penguin exhibit from a bachelor pad at the Avian Conservation Center, where he quietly took up his old residence. Zookeepers and fans are waiting with bated breath to see what might happen next.

“That’s the big question,” Brown said. “It’s molting season in late July and early August, and around that time we see couples getting shaken up. It’ll be interesting to see if Harry spends any of that time with Pepper. We’ll have to wait and see.”

Photo of Harry and Linda from SF Examiner.

Email ThisBlogThis!Share to TwitterShare to FacebookShare to Pinterest
Labels: penguin