Is it those big brown innocent eyes that do it? 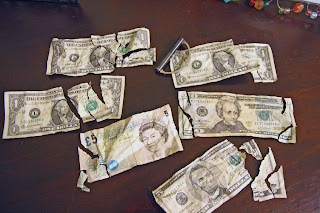 All over the world, dogs get away with crimes against property - even when their own owner's money is involved. A dog who ate a checkbook was accused of driving his owner to theft, but no charges of conspiracy were filed, as we saw earlier in July.

And when a dog in North Carolina ate $400, did his owner make him go out and get a job to pay her back? No - she picked through his poop to find pieces of bills to wash off and paste together.

Sadly, when an owner does try to hold his pet accountable for misuse of funds, he gets no help from the police, as a Kenyan man found:

NAIROBI - Robert Njeru, 25, of Nakuru, took his dog to the local police station after it chewed up almost 3 000 Kenyan shillings (about R250).

The farmer had left his rent money for the month on his bed when he went to work.

When he returned that night, all that remained were a few shreds of banknotes on the floor.

A furious Njeru marched his dog down to the police station and demanded that officers lock up the animal.

Police reportedly refused until he paid them 50 shillings to make it worth their while.

On hearing about the story, the district police boss fired the officer for accepting a bribe and released the dog back to its owner.

Police spokesman Steven Karungu said: "It was a really stupid thing for the police to lock up a dog after being given a bribe. It degrades the police force in this area.

"It is true the dog ate his master's money, but it was because of his own carelessness, and he should deal with his problems by himself and not involve the police."

Njeru has still not forgiven his dog and has put it up for sale for 20 shillings.

Photo from Flickr user mil8, who notes: "Reason to keep 'big bills on the inside' of a money clip #45: Dogs will get tired eating their way through the small bills."