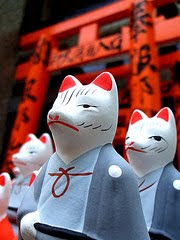 When we previously encountered a fox that stole a hundred shoes in Germany, there was no indication that it was the start of a trend, but might today's story show that foxes around the world have designs on all parts of our wardrobes?

Charlottesville Daily Progress - Charlottesville and University of Virginia police on Wednesday brought in trappers to catch a fox near Lambeth Field that acted oddly aggressive to passersby and bit two people.

“There were four calls to the Emergency Communications Center and at least two people reported being bitten by the fox,” said Ric Barrick, Charlottesville spokesman. “Another report said the fox was acting strangely and another said it took someone’s sweater.”

On the bright side, wildlife experts seized the opportunity to educate people about wildlife, including the following important points:

“People should let wildlife go its own way,” said Ed Clark, director of the Wildlife Center of Virginia in Waynesboro. “There’s also no way to be sure that a fox that’s trapped in the area is the fox that was acting aggressive, unless it’s wearing the sweater.”

No report on why anyone was wearing or carrying a sweater on an August day in Charlottesville, VA, where another blog reported the temperature in the 90s, nor on whether the sweater was actually wool, so maybe I better check to see if my poetic license is up to date and would cover this post title.