Be careful where you stick your hands 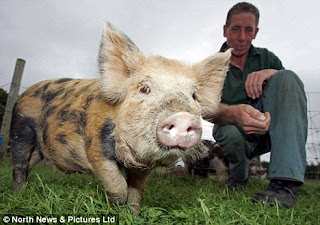 This blog couldn't be more pleased to introduce its first animal jewel thief. Not that we approve of such things, of course, but as chroniclers of bad behavior, it's satisfying to get to tick off another box, proving that there's really nothing that people do that animals can't do at least as well - or as badly.

Ginger, a Kune Kune pig, clamped his jaws around the jewel after Anne Moon put her hand into its pen at Easingwold Maize Maze in North Yorkshire.

When Mrs Moon, pictured, pulled away, the diamond had gone. Now farmer Paul Caygill, who owns the attraction, has been given the task of sifting through Ginger's sty to find the gem.

He said: 'It wasn't malicious or anything, it didn't take her finger off but took the central stone of her diamond ring.

'So far it hasn't turned up, but we are still hoping. I don't know how long it takes for nature to take its course.'