Of course the cat gets away with it 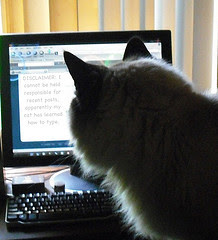 It's a new trend among criminals - blaming the animal. But it's not working out too well for most of them. Unfortunately, they don't seem to be readers of this blog, so they're not choosing very plausible crimes. The woman who said the dog forced her to steal by eating her checkbook who we read about last month was the best of them - at least we know that dogs do eat money.

But what was the woman thinking who blamed her horse for being drunk? Even a quick glance at the posts on drunkenness here would show that there are much more plausible creatures to blame for that.

And now we've got this fellow in Florida. Well, he's got the cat walking on the keyboard thing right -

JENSEN BEACH, FL — A well-known mathematical theory states that a group of monkeys randomly typing on a typewriter could eventually write the complete works of William Shakespeare by pure chance.

But Martin County Sheriff’s investigators said there is no chance that one cat could randomly type words on a computer keyboard to download child pornography 1,000 times.

When deputies searched Griffin’s home and talked to him, he told detectives that he would leave the room sometimes while downloading music and when he returned, his cat had jumped up on the keyboard and strange images were downloaded.

Griffin is being held in the Martin County Jail on $250,000 bail. The cat was not charged with any crimes and is being cared for by a family friend, according to sheriff’s officials.