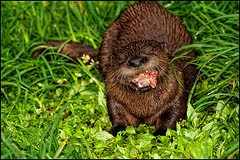 Even we here at Animals Behaving Badly can sympathize to some extent with the subjects of some of our reports. Biting a mayor or a zoo director might be the only way to express a legitimate grievance. And who among us can honestly say we've never wanted to pee on a president?

But what's going on when turkeys harrass postmen and innocent pedestrians, or cows knock over bicyclists?

And now we've got a woman from Austria, taking a swim on her yearly vacation to Wisconsin, attacked out of nowhere by three otters. While she had the sense to leave the water when they appeared, the otters followed her and bit her on the legs eight or nine times. She's now undergoing a series of rabies shots.

Wildlife experts had no explanation for this allegedly unusual event. But the next time you're excited to see some charming wild creature in the woods, remember this quote:

“I thought it was really cool,” she said. “I’d never seen an otter before. Then, all of a sudden, there were three of them.”

Sure it's cute, but look at the teeth on that otter from Misterqueue.