Revenge of the Cow or political statement? Bovine blind-politician-tipping 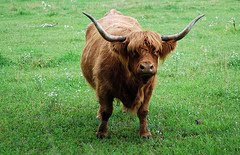 OK, a cow knocking over a bicyclist is one thing. Bicyclists can be pretty annoying, what with riding the wrong way down the street, ignoring traffic signals, and wearing those idiotic skin-tight shorts.

But knocking over an old blind man? On his birthday? Even if he is a politician, that is pretty impressively low. And yet in this article from the BBC, it's the damn DOG that everyone seems most concerned about:

Former Home Secretary David Blunkett is recovering after being injured by a charging cow in Derbyshire.

The incident happened on Saturday while the Sheffield MP was out walking on his 62nd birthday with his guide dog Sadie in the Peak District.

It is believed the cow ran at the dog and while trying to protect her, the blind MP fell and was trampled.

He suffered a broken rib and "painful bruising" but was declared well enough to attend a Labour Party meeting later.

Alison Pratt, from the National Farmers' Union, gave the following advice to others should they find themselves in a similar position.

"The best thing to do is to let the dog off the lead so it can run away because obviously a dog can run faster than you," she said.

"The next thing to do is to get quite quickly to the edge of the field, collect the dog and leave."

All I have to say about that is that I've told my dogs, if a cow comes after me, you better expect that you're going down too.