Here's one Craigslist ad I'd really like to see 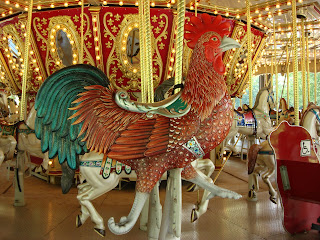 TELEGRAPH, UK - Elvis the cockerel has earned his reputation as a ladykiller after his hen died from exhaustion, seemingly unable to keep up with her mate's sexual appetite.

The cockerel used to have four hens vying for his attention but after three died he was left with only Berol to keep his libido satisfied.

Unfortunately she had to be put to sleep after becoming exhausted by Elvis's constant demands.

Now Elvis's owner Katherine Cooke is looking for a new home and hen harem for the one-year-old cockerel.

There's a nice photo of Elvis if you click on the link to the story. He's definitely a handsome fellow, but he obviously doesn't need any more encouragement, so instead of reproducing his photo that's another attractive rooster from the carousel of Turtle Back Zoo in New Jersey.