New Jersey bear beats up a man for his lunch, doesn't eat his veggies 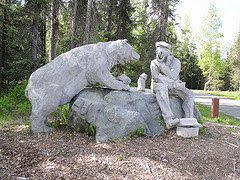 AP, VERNON, N.J. – A northwestern New Jersey man said he was mugged in his driveway by a sandwich-craving bear. Henry Rouwendal said he was packing his car last Friday when he was hit from behind and knocked to the ground. He said the culprit was a black bear who took his Italian sandwich.

Rouwendal said he kicked the bear in the snout and throat.

He said the bruin made off with the bread, salami and other meats but left behind the lettuce, onions and tomatoes.

Coverage of the encounter in the NJ Star-Ledger goes into more dramatic detail:

Suddenly, Rouwendal said, something hit him from behind.

"It blind-sided me. I was on the ground and I was thinking, 'What the hell just hit me?'" said Rouwendal, who also suffered a large cut on his left temple and several deep bruises on his knee, elbow and buttocks.

Rouwendal said was knocked, face-first to the ground. When he rolled over, the bear was standing over him and then grabbed the sandwich.

"I kicked him three times in the snout and one time in the throat. I think the one in the throat got him," Rouwendal said, adding the bear started to run toward the rear of his home on Panorama Drive in the Lake Panorama section of Vernon.

Local wildlife officials - no surprise whose side they're on, I guess - make excuses for the poor hungry bear:

"At this point, it just doesn't seem we will label this as an attack on a person. ... He has no bruises, claw marks or scratches or even a ripped shirt that indicates it was a purposeful attack by the bear," said Lawrence Herrighty, deputy director of the DEP's Division of Fish and Wildlife.

Herrighty said it appears the bear went for the sandwich and not Rouwendal.