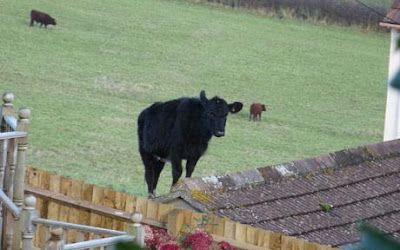 A cow in England has gotten above herself: A home owner who found her roof damaged and feared that burglars had been trying to get in, discovered that a cow had been jumping on the roof. This was good news for some, at least:

Local PC Ray Bradley said: "This was initially recorded on my figures as a burglary so I am glad I can take it off."

This blog's classical music correspondent suggests that the uppity cow may have been inspired by early twentieth-century surrealist ballet Le Boeuf sur le toit, "The Ox on the Roof." Could this be the start of a spate of surrealism-inspired bovines? We note that one of the founders of Surrealism was named Jacques Vache. More than coincidence?

According to Wikipedia, Vache "was known for his indifference and for wearing a monocle." Cows seem to have the indifferent attitude down pat, so if you see any wearing suspicious eyewear... well, we humans might as well get a piece of this, so, offer to be its agent and sell tickets?