Watch out for bad animals in your holiday travels 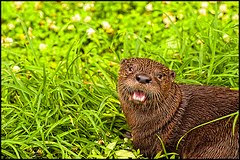 As if flying wasn't hard enough during the Christmas season, animals are making it worse: a flight from Houston to Columbus was delayed on Tuesday due to escaping otters.

Ohio's 10tv.com reported that the otters made a break from their carriers in the cargo hold and it took crew over an hour to recapture them so that the plane could continue on its journey. Some passengers initially thought that the excuse was simply a more original version of the usual implausible stories that airlines tell their customers, until they saw the otters dashing around on the tarmac.

What's more, upon arrival in Columbus, some found that otters had been rummaging around in their bags - perhaps trying to steal Christmas gifts, or maybe, make up for the lack of beverage service in the cargo hold:

Some of the passengers picking up bags in Columbus discovered that the animals had gotten into their luggage.

A man who had coffee in his suitcase found his bag open and covered in what appeared to be hay.

"Some otters got into them," he said. "They must have smelled the coffee."

Otter,obviously pleased with his wicked little self, by our friend Misterqueue.

Email ThisBlogThis!Share to TwitterShare to FacebookShare to Pinterest
Labels: otter