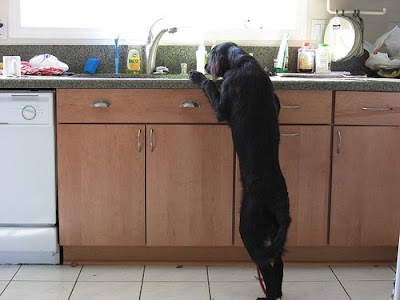 A dog started a fire at a home in Wales resulting in 6,000 pounds worth of damage. As reported by the North Wales Daily Post:

The dog jumped up and nudged on a switch for a range oven. That heated up a chip pan on the griddle which eventually set fire to the kitchen. Owner Paul Gregson said: “We’re calling him Alfie the arsonist now.”

The dog's owner theorized that he was looking for something to eat:

Three-year-old Alfie is a liver-coloured, flat-coated retriever who Paul described as “very lively, bouncy and smelly”.

He added: “The breed is a cross between a pointer and a red setter. They are slow to mature – if they mature at all. He exists to eat. He’s a walking stomach.”

This blog's official Flat-Coated Retriever expert, when contacted, was unsurprised by this story, given that her dog had once turned on the stove and filled the kitchen with gas. "This is why I have childproof knobs on all my burner knobs," she commented, and provided the above photo of a flatcoat, thus thwarted from arson, trying to figure out how to start a flood instead.

An additional flatcoat owner who was consulted described an incident in which her dog waved his tail over the burner and caught it on fire. She now has an electric stove.

They tell you to do your breed research, but, man, you don't find this stuff in the books.