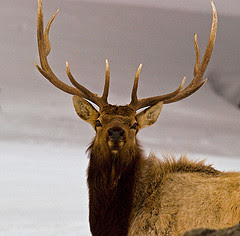 The post title says it all on this one: A man in Sweden was arrested and jailed for ten days after finding the body of his wife, who had not returned from walking her dog. He has now been cleared of suspicion after technicians found physical evidence pointing to a very different perpetrator, according to the BBC:

Now the case has been dropped after forensic analysis found elk hair and saliva on his wife's clothes.

No motive has been reported, but the following is a warning to shiftless gardeners that your lazy clean-up habits can have dangerous consequences:

The European elk, or moose, is usually considered to be shy and will normally run away from humans. But Swedish Radio International says the animals can become aggressive after eating fermented fallen apples in gardens.