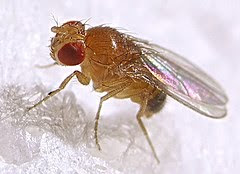 If this blog called an Alcoholic Animals Anonymous meeting, it would be attended by a pretty wide variety of species, including elk, elephants, and badgers.

You can also find video of drunk squirrels, and if you believe the photos here, our mythical meeting might also attract chickens, woodchucks, otters, rats, rabbits, cats, dogs, goats and ferrets. (The crab, I suspect, is clearly a setup.) If you prefer classier journalistic sources, here the New York Times mentions drunkenness in at least half of those creatures and also cows, monkeys, pigs and lorises.

Mammals aren't the only culprits, either: we've seen in previous posts that bees are worse than college students when it comes to their taste for booze.

Bees are fairly complicated as insects go, though, and you might figure that such a hard-working insect might need to drink to relax more than most. But now research reveals that even fruit flies can become alcoholics. As reported by Science News:

Earlier studies found that alcohol has profound physiological effects on fruit flies, but the new study is one of the first to offer flies the choice to drink. Anita Devineni and Ulrike Heberlein, both of the University of California, San Francisco, devised a fly-sized drinking device reminiscent of the water bottles in hamster cages.

Given the choice between plain and alcoholic beverages, the study found, fruit flies preferred alcohol. They also developed a tolerance, gradually coming to prefer stronger drink. The researchers observed drunken behavior, although in fruit flies, this was pretty much confined to "hyperactivity and loss of coordination," since they were not given access to lampshades to put on their heads or cars to drive into stationary objects.

If you've ever wondered how certain alcoholic beverages become popular and traditional despite how nasty they taste, this study also suggests that this phenomenon extends to much more primitive creatures than ourselves: