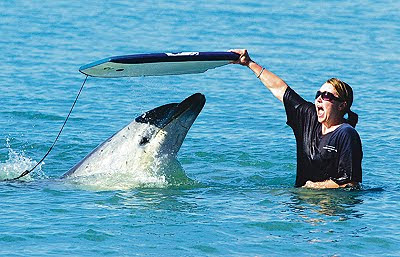 When Moko the dolphin first appeared in a New Zealand harbor, people who obviously don't read this blog called his behavior 'playful.' Now, the Telegraph reports:

Six people have needed rescuing by lifesavers in recent days as the dolphin has become more aggressive.

Among them were two 12-year-old girls who were both injured when they were "mugged" by Moko for their boards.

And a 16-year-old surfer was stranded 500 yards offshore after the delinquent dolphin stole his board.

Gisborne man Dean Makara said he was knocked out of his kayak.

...In an earlier incident, an exhausted woman swimmer feared she would drown after Moko refused to let her return to shore because he had not finished playing with her.

Of course, there are still always those who don't seem to know whose side they should be on. Such as:

There have also been calls to appoint a "guardian" to safeguard Moko's interests.

Advocates for the creature have sprung to his defence, saying they are horrified at headlines dubbing him "Moko the Menace".

Dave Head, an environmentalist who has studied Moko, angrily dismissed reports that the dolphin was a sexual predator.

And, as reported by Sky News:

He told The New Zealand Herald: "If you don't like the way he plays, then don't go out in the water."

And, a whole storyful of dolphin huggers in the local Gisborne Herald, titled "Don't Blame Moko," includes the following quote:

“It is an honour to have Moko and experience first- hand Mother Nature and [Maori sea god] Tangaroa. I have never heard of dangerous dolphins, only people being saved by them.”

But to the contrary, as readers of this blog know, despite their inexplicable charming, peaceful, new-agey-t-shirt-decoration reputation, dolphins are sexual harrassers, and gang rapists, and babykillers.

Add that to the fact of this dolphin's age - what the Telegraph described as an "exuberant and insolent hormone-pumped teenager" - and you've got a recipe for interspecies disaster, when the other species is one as clueless as our own.

"He's doing what we all do as teenagers," he said.

"He's testing his boundaries, but he's testing them on humans - and humans are coming off second best."


Photo of Moko with human trying to eliminate herself from the gene pool from the Gisborne Herald.