Employment statistics going to the dogs 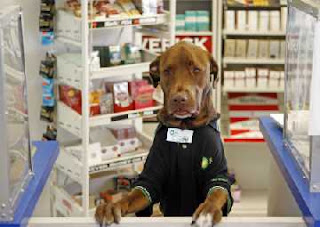 As if the unemployment rate wasn't high enough already, now DOGS are getting jobs that ought to belong to people:

St Petersburg Times - The sequence of events happens dozens of times every day at the BP gas station/convenience store at U.S. 19 at Nursery Road.

An unsuspecting customer pulls up to the drive-through window. But instead of a store clerk, up pops two paws, deep brown eyes and the tongue-flapping grin of a happy chocolate Labrador retriever named Cody.

The dog's owner disavows any intent to replace humans with lower-paid canines. He says he just wanted his dog for company at work, and that he put the shirt on him as a joke. Perhaps the man sincerely didn't realize what he was setting in motion.

But like the turkey we met last week, whose perfect attendance made toll-takers look bad, the dog immediately saw his opening:

He can do what the normal gas station clerk usually cannot.

"Convenience stores are so unpredictable. People come in drunk, stoned, angry, you name it," Mansour said. "He calms them down. Animals have the ability to soothe the human soul."

Earlier this year, a woman who had been fighting with her husband came into the station.

"She came in all sorts of bawling and crying," Mansour said.

Cody, sensing something wasn't right, went to the woman. She put her face next to his, and sat on the floor with him. After several minutes talking to Cody, the woman pulled herself together.

You see where this is going. Now, just pumping gas won't be enough to get you hired. Will humans also be expected to provide psychological counseling, for minimum wage, to compete for jobs with dogs?