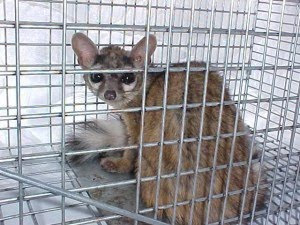 Ever found muddy cat footprints all over your windshield? If you think it's hard to see the road, imagine if you were trying to see into the depths of outer space. That's what started happening to astronomers at the Smithsonian's observatory in Arizona in 2008. Not only was their view obscured, but five of the telescopes, which are more delicate than your car windshield, were eventually damaged.

The culprit was eventually caught: the ringtail cat in the photo, which despite its name is a relative of the raccoon.

But as so often happens, people just don't know what side they're on. Listen to the scientists in the video cooing at another ringtail who's broken in to steal their food - actually it might even be maybe the same one, since it was released from the trap:

And here's the reaction of the leader of the project, from the story on the Smithsonian website:

“We’re considering making the ringtail cat the unofficial mascot of the MEarth project,” said project leader David Charbonneau. “With those big eyes, they’ve certainly got the night vision to be natural-born astronomers!”