Why did the creature cross the road? Part 1 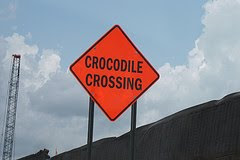 To cause a commotion, of course. Even a chicken might cause you to swerve or slam on the brakes, but what if you saw a Nile crocodile - especially if you were far from that Egyptian river, in Turkey:

A 1.2-meter long crocodile caused commotion as it walked across the road between western holiday cities of Bodrum and Milas on Tuesday.

A Nile River crocodile weighing around 12 kilograms frightened and surprised drivers and passengers as it came into the path of traffic at the 25th kilometer of a road near Güllük town. Drivers tried to direct the crocodile to some empty land near the road using sticks. Curious drivers pulled over to watch the crocodile. Traffic police and Güllük Mayor Aytunç Kayrakçı went to the place to see the crocodile.

How did a Nile crocodile get to Turkey? Turns out it was a pet, called Nilo, that lived in a pool at a local restaurant. Of course, there's always someone around to make excuses for the animal. It's not surprising that the owner claimed that none of this was the croc's fault:

"Tourists in our restaurant have good times with Nilo. It is a little bit aggressive now as it is away from its home."

But he wasn't the only one who downplayed the disruption:

A traffic police officer said it was the most interesting event he had witnessed in his professional life in around 20 years.