No turkey trouble for Thanksgiving at exit 14B 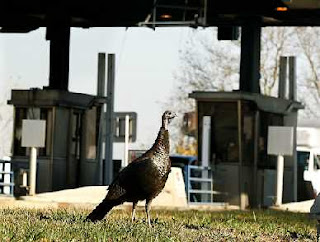 Turkey Week here at Animals Behaving Badly has been partially pre-empted: a turkey that has been disrupting traffic on the New Jersey turnpike was captured and relocated just in time for the holidays. The Associated Press reports that the wild bird has been making its home at exit 14B since the Spring, causing problems by dashing in and out of traffic and prompting people to do the same in order to take pictures. She also made toll takers look bad:

"Apparently, this turkey decided to make Jersey City her home, alongside of one of the top five busiest toll roads in America," said turnpike spokesman Joe Orlando.

"She didn't want to leave, she was a regular, and to be honest with you, she probably had better attendance than a lot of the employees."

Despite this, as is typical, staff had no idea what side they were on. They nicknamed the bird "Tammy" and one collector who enjoyed feeding the turkey Cracker Jacks was going to miss her, she said: "I think I'm going to have empty nest syndrome."