Bats have better sex than you 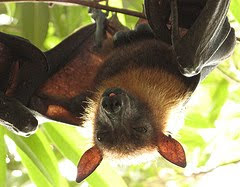 Although sex in the animal kingdom has many offensive permutations, oral sex among animals has rarely been documented by science. But a team of Chinese and British researchers report that short-nosed fruit bats have oral sex AND copulate at the same time:

As you can imagine, this is only possible because fruit bats are far more flexible than humans. If you click here, you can see a graph of copulation time illustrated with a lovely little drawing of a couple in the act, by Mei Wang (not making that up).

The video is sexually explicit and was edited and soundtracked by the researchers.

The abstract of the article concludes:

I think these guys just don't get it, because when you read the whole article, it turns out that not one of those hypotheses is "because it's FUN."

You can read the entire paper here if you want, you sicko.


Photo by Flickr user Diana Lili M. You'll never look at a fruit bat tongue quite the same way again, will you?