Why did the creature cross the road? Part 2 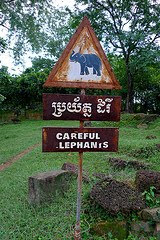 To mess with the minds of a couple of innocent midwesterners:

AP - A couple driving home from church nearly slammed into a giant pachyderm that had escaped from a nearby circus late Wednesday. "Didn't have time to hit the brakes. The elephant blended in with the road," driver Bill Carpenter said Thursday. "At the very last second I said 'elephant!"'

Carpenter, 68, said he swerved his SUV at the last second and ended up sideswiping the 29-year-old female elephant on U.S. 81 in Enid, about 80 miles (129 kilometres)north of Oklahoma City.

"So help me Hanna, had I hit that elephant, not swerved, it would have knocked it off its legs, and it would have landed right on top of us," he said. "We'd have been history."

...After sideswiping the elephant, his wife, Deena, flagged some people down and used their cellphone to call police.

"The dispatcher didn't believe her: 'You hit a what?"' he said. "I told my wife, I don't know whether to cry or laugh."

The elephant, which escaped from a circus, got off easy, with only a broken tusk and a leg wound, which was treated by a local veterinarian.