Turkeys are out for revenge 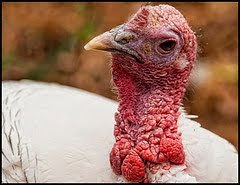 If you decide to take a little stroll to work off some of that turkey dinner today, watch your back.

We've previously seen turkeys attacking in New England. Now the Philadelphia Inquirer reports they're getting out of hand in their area as well. As usual, some people invite trouble by feeding the birds, encouraging them to hang around. To start, their activities may seem innocent on the surface:

Last week in Mountville, Lancaster County, two turkeys tried to buddy up to customers and employees at B&J Automotive.

They sat on the building's roof and watched traffic on busy Route 462, tailgated on the back of a truck, and wandered into the middle of the street.

"People blow their horns and flash lights and the turkeys just look at them," said Joe Miller, who owns the shop.

But elsewhere in the Philly area, residents saw what it can lead to when you buddy up to turkeys:

In September, five turkeys who had wandered onto Brookmead Drive in Cherry Hill were caught by a local cameraman appearing to menace a little boy who had a bicycle. A woman nearby, presumably his mother, snatched him out of harm's way and ran away screaming.

The video got posted in YouTube, and as of today had received nearly 200,000 hits.

The animals were rounded up by the township's animal control officer.

"We had some turkeys that had gone wild - literally," Cherry Hill spokesman Dan Keashen said.

Keashen said turkeys aren't usually violent. "But apparently these turkeys were being harassed by kids in the neighborhood. They were pretty riled up," he said.

People were also feeding them, which would make them want to stick around, he said.

See the video set to a rap song with a ton of cussing here. And if I haven't gotten you worried enough, just try searching "turkey attack" while you're over there at YouTube.

Photo once again by birdman Misterqueue.

Email ThisBlogThis!Share to TwitterShare to FacebookShare to Pinterest
Labels: turkey