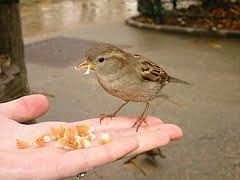 You think it's an innocent activity, giving stale bread to birds. But you're handing them a weapon - a weapon to halt the progress of science.

A piece of baguette dropped by a bird caused a short circuit at the Large Hadron Collector, the world's largest supercollider, so large that it is partly in France and partly in Switzerland.

OK, in fact the power failure did not shut down the massive device, but that's just because it has been out of commission since last September due to non-animal-related problems. All that means is that this time, we got off with a warning.

And yeah, maybe you won't lose any sleep if they never find the Higgs boson, but who knows what those former dinosaurs will think of next. Next time, that bit of stale croissant or seven-grain might prevent someone from discovering a cure for cancer or a new source of electricity.

So think of it, next time you want to toss some crumbs. Put those old baked goods in the trash where they belong and let those little feathered fiends fend for themselves.

Story via ZDNet UK; photo of WHAT NOT TO DO by Flickr user Mollivan Jon.